I’ve been working on projects in Scott Dadich’s orbit for the last several years. I did a lot of stuff for Wired while he was Editor-In-Chief, notably a pretty weird typeface and some pretty headlines. When Scott announced that he was departing Wired I felt a little glum that I hadn’t been able to work on more things with him. Then, I got an email saying, “This is a big secret: Scott is starting a company. Can you help us with the logo…tonight?” I did and a couple of days later Godfrey Dadich Partners was unveiled to the world. Since then I’ve done a fair bit of work for them and I’ve gotten more than a few emails with notes like, “We’re doing this thing with this amazing person and we’re wondering if you’d want to work on it with us.” Getting an email from them without “Re:” in the subject line is like getting a surprise present. One afternoon, I got one of these from Allie Fisher, a creative director at GDP, and it said, “We’re doing something with National Geographic. Can we give you a call?” A couple of things: 1. National Geographic!? It’s one of humanity’s great endeavors! 2. No one ever gives me a call, 99.9% of my communication is done via email, I think I had only ever talked on the phone to the folks at GDP twice. So, after processing this for 0.06 seconds, I responded, “I’m at my desk.”

My phone rang and it was Allie and Scott. So, they were doing a major rethink of National Geographic Magazine in collaboration with Susan Goldberg, Editor-In-Chief, Emmet Smith, Creative Director, and the rest of the team at the magazine. This was going to involve reorganization of the magazine’s contents, a completely new design and more. All of this was in preparation of the magazine’s 130th anniversary. It was going to be a very big, very high-profile project and everything needed to be perfect. They wanted a typographic palette with lots of personality. Would I be interested in working on some typefaces and giving the nameplate some thought? “Yes.” With that, we were off.

GDP had done a ton of research and had compiled a portfolio of significant typographic styles from the previous 130 years that showed an incredibly rich typographic history. They wanted to build the new typographic palette on this research. In particular, they were interested in the beautiful serif typefaces used in the 1800s and the quirky headline styles deployed in the 1970s. They wanted me to focus on two of these headline styles. One was a condensed slab serif (Niebiolo’s Egizio Condensed, set in mixed case with very tight letterspacing) and the other was an idiosyncratic sans serif (Photo-Lettering Inc.’s Fiedler Monogothic Condensed #6, set in mixed case). They wanted me to consider these as starting points for new typefaces with more modern sensibilities. These were to be used with two faces designed by Kris Sowersby of Klim: Grosvenor (a variation of Tiempos Text) and Geograph, a new geometric sans serif.

Shortly after we talked, they showed me early sketches of their ideas for the magazine redesign. I was blown away. The basic building blocks of visual communication had been stripped to their essence and combined in stark ways to create something thoroughly modern. The page geometry had a beautiful simplicity. The typography was richly textured. The photography was given the white glove treatment. The hierarchy of elements was clear and unambiguous. Even though these were just sketches, I could see the potential and I was excited to be able to contribute to making a couple of the parts even better. These sketches used an off-the-shelf digital version of Egizio Condensed and a very condensed sans serif as stand-ins for the typefaces I was tasked with creating. This showed me exactly what my typefaces would need to do:

The sketches also showed me the exact environments in which my typefaces would be used:

The slab serif was to get the most use, so I started with that. The use of an existing version of Egizio Condensed in the layout sketches allowed me to do a deep analysis what was and wasn’t working with the slab serif. Egizio is one of my all time favorite typefaces. The regular width is amazing, the italic is a masterpiece and the condensed, while quite quirky, can be very lovely in the right environments. However, in these ultra-precise layouts it just wasn’t right. In headlines the spacing was too loose, the shapes were too open, the short x-height required too much line-spacing and the not-light-but-not-bold weight was not right. In paragraph blocks the proportions were too varied, the width was slightly too narrow and the contrast impaired readability. In gigantic initial caps, the shapes lacked a certain… something. Plus, there was only one weight. The general feel was good, but Egizio Condensed wasn’t exactly what the layouts needed.

I began by drawing something from scratch that was in the same general aesthetic realm as Egizio Condensed, but addressed the problems I had noted. (Side note: Wouldn’t it be easier and faster to just modify the existing version of Egizio Condensed? I never edit existing fonts [other than my own]. Every typeface designer is different and we each have our own ways of drawing and it’s usually faster to start over than to modify someone else’s work. Besides, modifications are often not permitted by the typeface’s license agreement. So, no, I don’t do that.) I addressed the issues I had noted by reducing the contrast, raising the x-height, unifying the horizontal proportions, making it all slightly wider and so on. I sent Allie a proof along with my general thought that “It’s not working, but I have some weird ideas about how to make it better.”

Allie agreed that it wasn’t right and encouraged me to try whatever I thought would make it work, even if it meant departing from the archival reference. The gist of my weird idea was that it needed to be streamlined and the geometry needed to be caricatured. I thought this would nicely echo the overall precision of the layouts in the micro world of typography and this would…(imagine some big, fancy words that didn’t exist when I went to art school). I wanted to be able to test these ideas very quickly, so I tried a new way of working. First, I created an InDesign document that showed me typographic details from the layout sketches. It had everything from headlines knocked out of photographs to blocks of text to informational captions. Next, I made a little RoboFont tool that would automatically take the changes I was making to the font and apply them to my InDesign document. This let me see my changes immediately in situ. 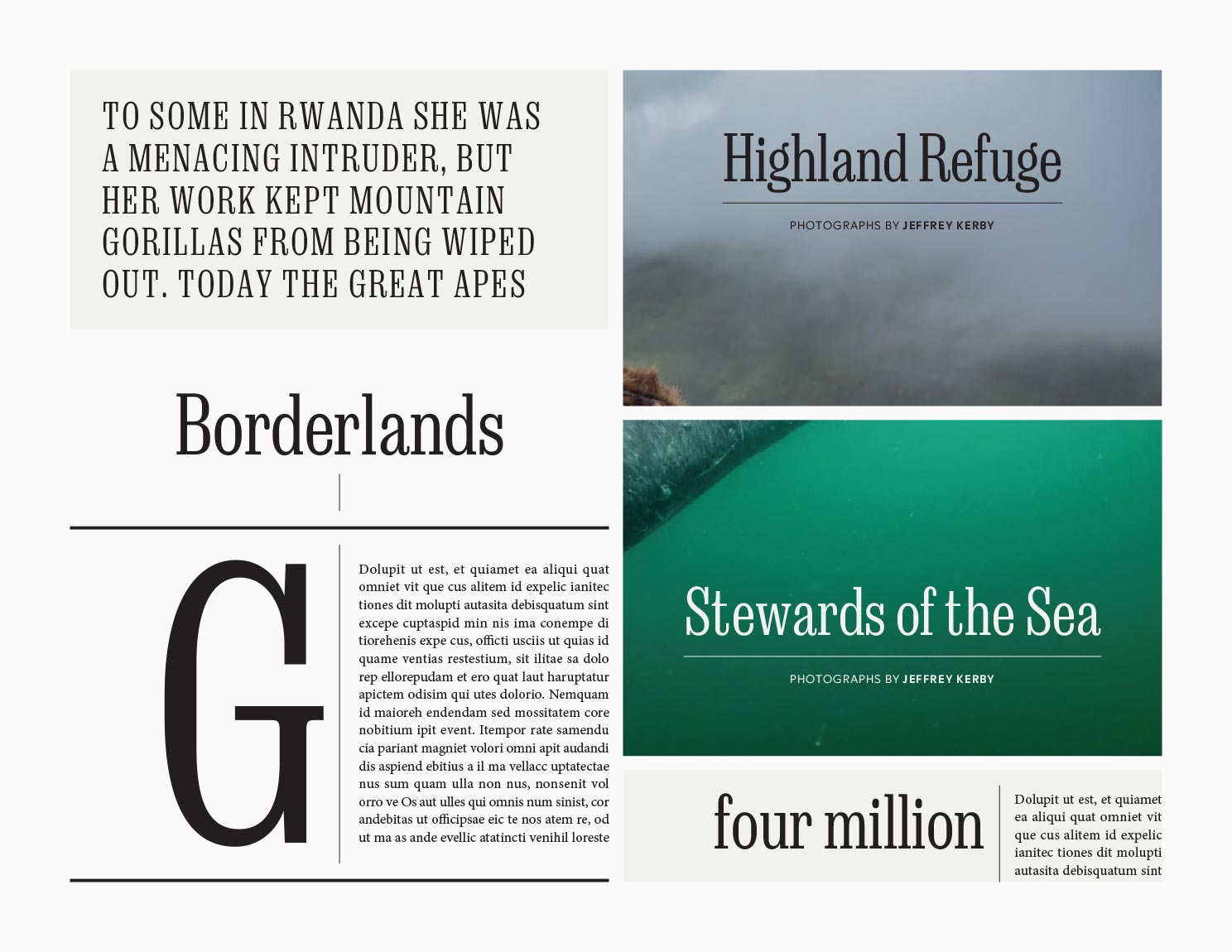 This working method allowed me to very quickly try big, off-the-wall ideas, see if they worked and then try something else. I’d do something like significantly flatten vertical curves, look at them in InDesign and decide to go forward, back or sideways. It was a very interesting way to work that led to lots of solutions that I wouldn’t have come up with using my usual stage-based working methods. I’d check in with GDP every so often and say, “This is how it looks now. I’m still thinking.” And they’d tell me, “Cool. Keep going.” Their trust in me to solve all of this was terrifying and exhilarating.

Meanwhile, when I needed a break from the slab serif I’d spend a little time on the sans. The slab serif moved along quickly and smoothly, with a very linear development progression. The sans was the opposite of that. I started off by creating a very strict digital interpretation of Fiedler Monogothic Condensed #6 (aka FMC6). I made an in situ proofing document just like I had for the slab serif and…

This was a complete failure. It was hard to pinpoint exactly what was wrong, but I had a theory. The archival headlines had a softness to them: the corners were subtly rounded and the edges were slightly fuzzy. This, likely a side-effect of the reproduction processes of the 1970s, combined with the offbeat shapes of FMC6, made for very personable headlines. The precision of modern digital typography killed all of that. The odd shapes of the original were in my typeface, but the warmth was gone. I could have given my interpretation rounded corners, wobbly lines and so on, but this felt like a cheap trick. I showed Allie my work and told her that I thought it was an unsolvable dead end. I suggested several off-the-shelf typefaces that they could use instead of a custom drawn sans serif. She wrote back and told me that she agreed that it wasn’t working, but not to give up on the idea completely.

I went back to work on the slab serif. I felt like it was in pretty good shape, so I started adding weights. As I did that, something started to feel off in the heaviest weights. Allie figured out what it was: the face felt too soft in the layouts. I tinkered with some different things and finally figured out that it was the way I was handling terminals. In Egizio Condensed, these were balls with a sharp point at the connection of the curve and the terminal. In my streamlining process, I had reduced the ball to a lozenge shape that emerged smoothly out of the curve. In the lighter weights this looked good, but in the heavier weights it made everything feel a bit puffy. I tinkered some more while looking at the effects in my InDesign test document and stumbled onto sharpening one side of the terminal. It was a really subtle change in individual letters, but it made a huge difference when these repeated in words.

This immediately made it feel like a 21st interpretation of classic wood type styles. It was old but new and I was extremely excited. When I teach, I like to tell students that there is a point in the design process at which the control over the design of a typeface abruptly switches from the designer to the typeface. The typeface begins asserting its own opinions and the designer must embrace the role of outside observer. This terminal shape change was that point in this project. The samples in my InDesign proof went from looking like sketches to looking like real things. This moment was so illuminating that it also told me what to do with the sans serif: make a copy of the slab serif, slice off the serifs, reduce the contrast, condense it, flatten the sides even more, replace the rounded bits in the terminals with subtle arcs and make some slight structural changes to a few letters. Do this and I’d have a modern version of a wood type grotesque. FMC6 looks like it was inspired by Alternate Gothic which was inspired by wood type grotesques so, this was it. I stayed up really late one night making a proof of concept, sent it to Allie with a note that said, “You’ve probably moved on, but just in case you haven’t… I stumbled onto this.” She wrote back and said, “It needs to be more condensed, but, yeah, this is it. Go!”

Everything flowed from there. I spent a few months moving points around, tweaking weights, adjusting kerning and so on. Then, it was done. We named the slab serif Earle, for famed National Geographic Explorer-In-Residence Sylvia Earle. We named the sans serif Marden, after Nation Geographic’s noted polymath Luis Marden.

If you told 10 year old me that someday National Geographic Magazine would publish an article about dinosaurs that had a headline set in a typeface I designed, I wouldn’t pay any attention to anything other than the word dinosaurs. Later I’d wonder what a typeface was, but dinosaurs are cool. I feel very honored to have contributed to this great publication. 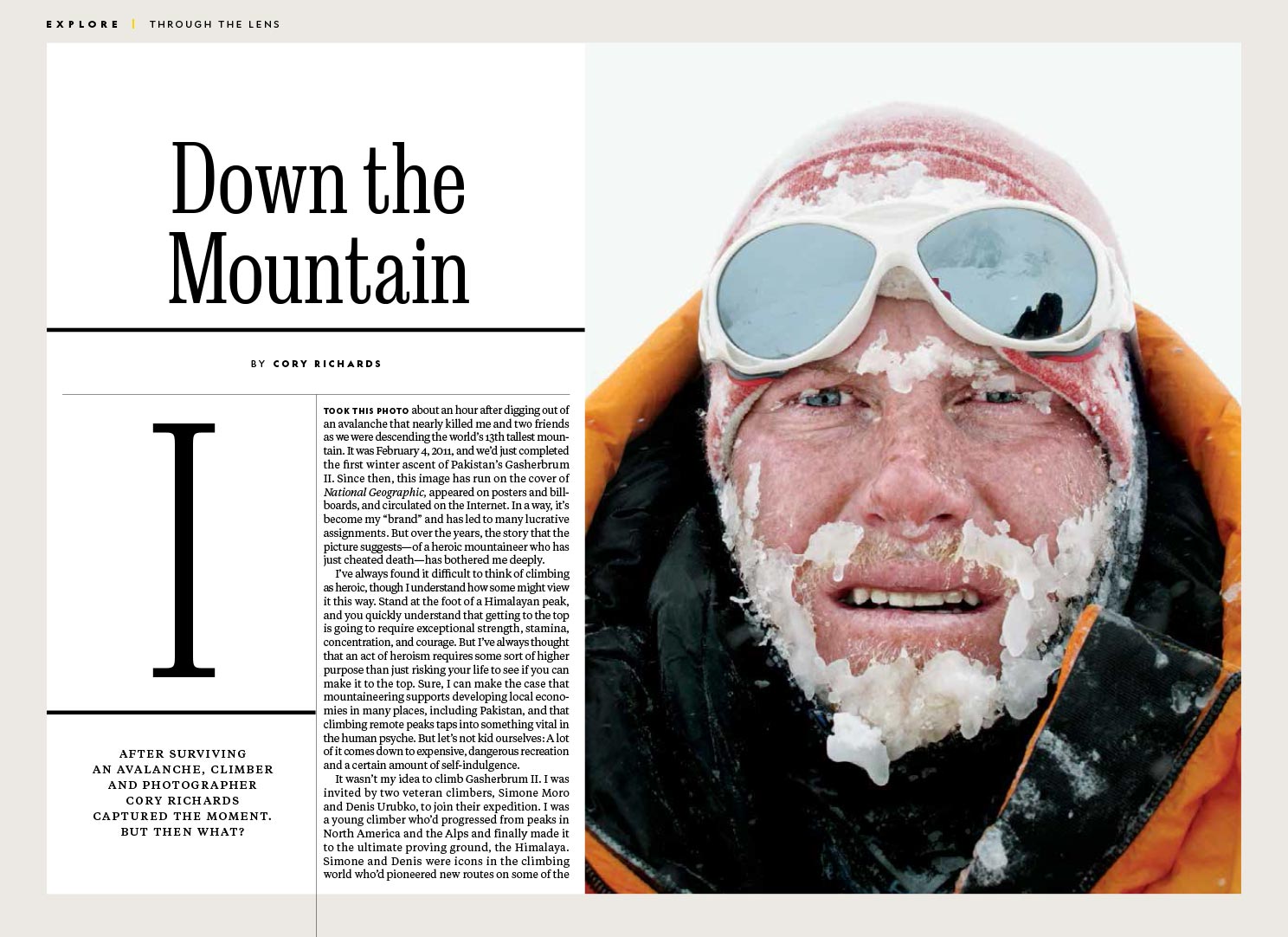 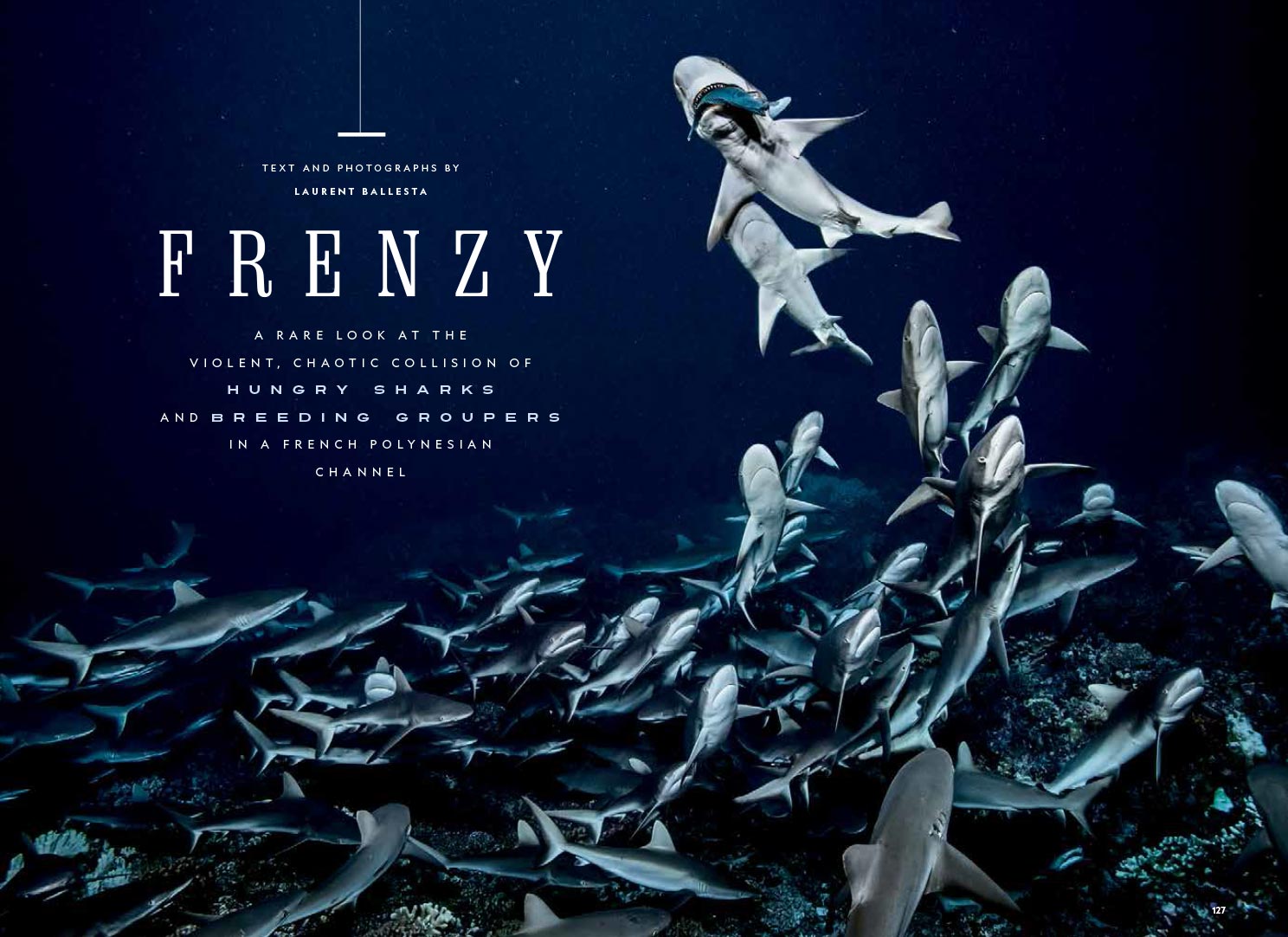 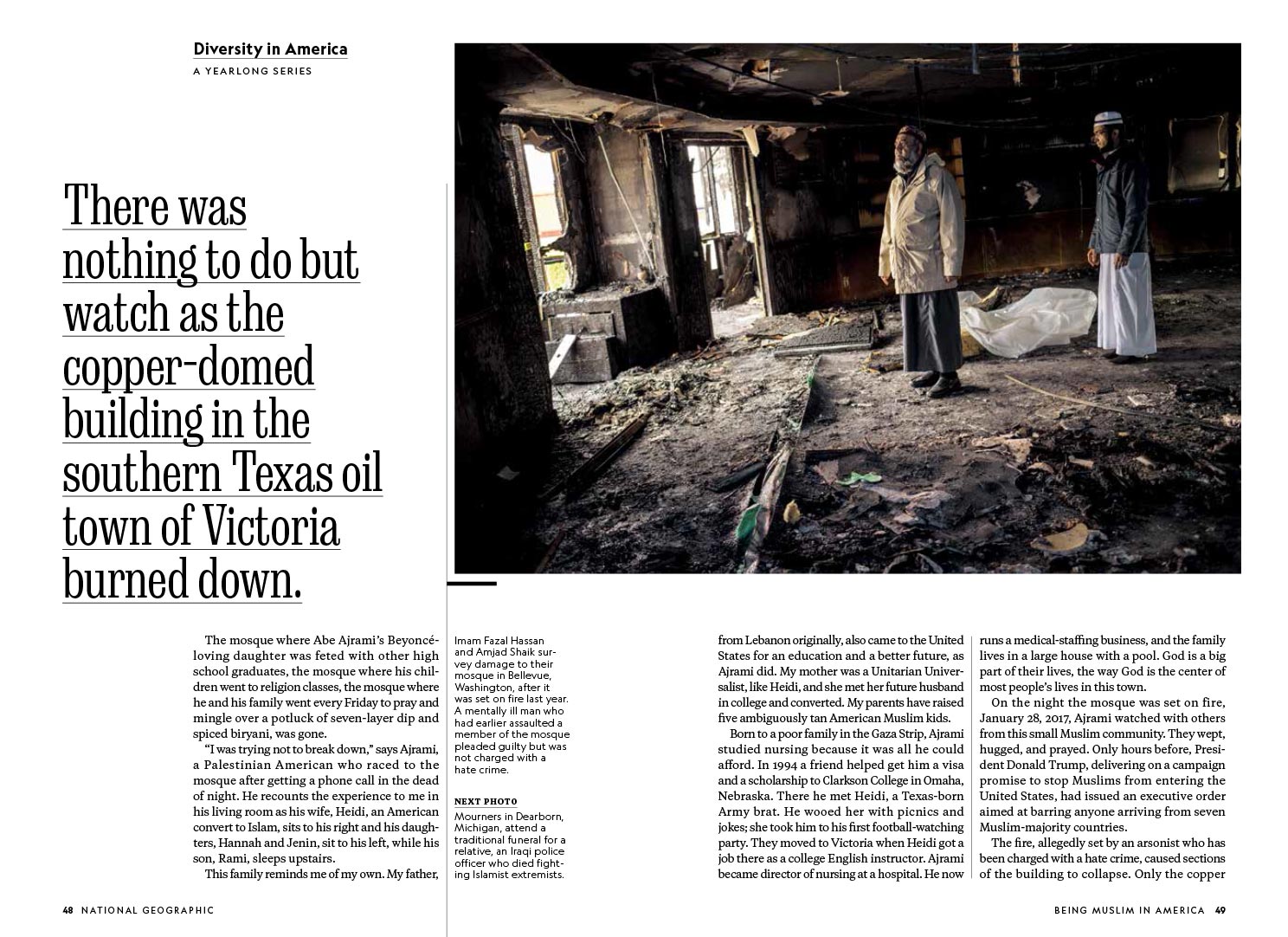